Full Council, Maiden Erlegh and Labour's opposition to their opposition

I didn't relish last night's Full Council meeting as I am currently ill and have almost lost my voice. Part of me therefore regretted having asked three councillor's questions in advance of the meeting which I then had to ask formally at the meeting -- where are we up to on getting food waste recycling, what is the Council doing on the issue of Maiden Erlegh catchment area changes and can we get the old disused toilet block in Palmer Park back into use.

I have copied my question and answer on Maiden Erlegh at the end of the post.

I think it is also worth commenting on the Labour's performance at the meeting. None of the 19 Labour councillors had submitted any councillor's questions. Later on in the meeting the Labour group asked to amend the Budget Savings Proposals recommendation motion. Voted to amend the motion. But then voted against the amended motion in the final vote. Confused? Finally at the end of the meeting the monitoring officer stated that the Standards Committee motion being moved by the Labour group was unconstitutional. To sum up, they didn't cover themselves in glory.

Back to my question on Maiden Erlegh, I asked the Lead Councillor for Education:

"What is the Council doing to ensure that Maiden Erlegh school remains an option for children in the south of Park Ward?

Reading Borough Council responded to an initial consultation stating that its preference was for the status quo to remain in place as the alteration proposed to the designated area for Maiden Erlegh would be likely to disadvantage Reading resident parents. Other suggestions were also made by the Council and others. Wokingham has now issued a formal consultation with a revised set of arrangements which reinstates the area of Park Ward previously excluded from Maiden Erlegh’s DA and offers an improved eligibility for siblings.

In response to the formal consultation on the amended proposals we have welcomed the shared designated area arrangements which provide the possibility of choice, and objected to the tie breaker as it is difficult for parents to understand, does not enable parents to establish the likelihood of gaining a place in Maiden Erlegh for September 2012 and disadvantages Reading resident parents. We have again stated that we would prefer the status quo to prevail or failing that a change to the tie breaker, back to straight line distance from Maiden Erlegh School.

The arrangements Wokingham is consulting on do not contravene any current legislation contained in the School Admissions Code 2010 so it is not possible to legally challenge their intentions, particularly as the arrangements are specific that Reading parents will have the choice of access to another Wokingham school, The Bulmershe, and areas of Wokingham Borough will be equally disadvantaged with the impacted part of Park Ward.

We will continue to work with neighbouring Local Authorities to ensure that there are sufficient places for Reading resident children either in Reading schools or, in this instance, Wokingham schools.

Since the last Labour administration failed to recognise, or admit, the seriousness of the pressure on school places until 2008, (despite lobbying by the Conservatives from 2005) or make adequate provision before the Labour government ran out of money, the potential for this administration to correct matters in the short term is limited.

In addition to sustained lobbying of Wokingham Borough Council, we are also exploring the potential for ‘free schools’ in the Borough (acknowledging the difficulties of securing private finance), while investing in the expansion of three Primary schools, within the constraints of the poor financial situation we have inherited.

Despite the somewhat impotent sabre rattling among Labour Councillors now, the fact is that Labour failed to act when first indications of this concern were apparent and according to my counterpart in Wokingham, my Labour predecessor made no attempt to phone, meet or reach any form of agreement. Labour failed to read key Minutes and asked only whether Reading children would still have access to Wokingham Schools. I am advised that the “clear answer was ‘yes they would’ and that remains the position today.”

They failed to specify ‘school places at Maiden Erlegh’!"

I am glad to see that the Conservatives are no longer saying that the current proposals from Wokingham are a "victory for dialogue" and that they are "pleased" and "delighted" with them. But there is still a long way to go!
Posted by Rob White at 12:11 No comments:

Cabinet met yesterday and by all accounts despite the politeness of its members it was a pretty depressing meeting -- unfortunately I couldn't make it as I was supporting parents at the Maiden Erlegh consultation meeting.

First there were the cuts to the grants of many voluntary and community sector organisations -- Reading Council for Racial Equality, Indian Community Association the list goes on.

Next were the budget savings proposals. As has been reported in the local press Reading has suffered from a large -- almost 10% -- cut in the grants it gets from central government -- the Conservative and Lib Dem coalition. This means that if everything else remains the same the Council needs to make £19 million of cuts to balance its budget. The report to Cabinet goes into quite a lot of detail about what this means, but the headlines are 300 jobs to go and a massive reduction in public services on which many people depend.

These cuts are going to have a devastating impact on many people's lives. The council needs to push back on central government. But instead they appear to be rolling over.
Posted by Rob White at 17:36 No comments:

Standing room only on a wet Monday evening shows the level of feeling on the issue of changes to Maiden Erlegh's catchment area. If Wokingham Council thought there was a lot of opposition to the previous proposal, they are in for a shock because I would estimate that the level of opposition has doubled. And now it isn't just Reading parents who think the proposals are wrong, but many Wokingham parents too.

Wokingham councillors kept very quiet at the meeting and I would assume there are some fairly heated discussions going on in the Wokingham Conservatives about this issue.

Well done to the Parents' Group for organising another well attended community walk down to the consultation.

The Parents' Group has organised two drop in meetings for parents and residents living in Reading and Wokingham Boroughs to find out more about the proposed changes to Maiden Erlegh catchment area and the implications. Run by parents for parents, these will be very informal. These proposals are complicated so please drop in for 10 minutes and ask questions.

Friday 21 January 6:00-9:00pm at Our Lady of Peace Church Hall (corner of Wokingham Road and Wilderness Road - Wokingham side of the Three Tuns)

I got the following from the parents' campaign against changes to the Maiden Erlegh school catchment area.

"Please show your support for keeping Maiden Erlegh a school for our children. Join our community walk to the public consultation at Maiden Erlegh. Find out more about Wokingham Borough Council's proposals and ask questions at the meeting which starts at 5:30pm

Meet at Earley fire station at 5:00pm on Wokingham Road to leave at 5:10pm. Please bring your children if possible. Invite your friends and neighbours.

Reading residents can join the walk at the Earley Fire Station and can meet up with those from the other side of the Three Tuns crossroads at Maiden Erlegh Drive at 5:15pm.

We will invite the press to cover the story and take photos. All local councillors are invited to attend too and find out more about people’s concerns.

We are a group of concerned parents and residents from Reading and Wokingham Boroughs who are affected by the proposed change to the Maiden Erlegh school catchment area. We are seeking a fair and realistic educational solution for a diverse community of Eastern Reading irrespective of Borough now and for the future."
Posted by Rob White at 14:53 No comments:

Find out what's happening to our NHS? 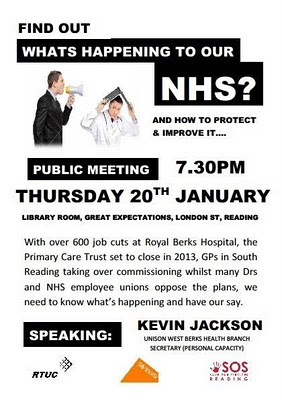 Public meeting on the future of the NHS with a Unison speaker.
Posted by Rob White at 19:07 No comments:

The campaign to fight for a fair deal for Reading children continues with Wokingham still ploughing ahead with their unfair proposals. This website has been created to help explain how Wokingham's proposals will impact people.

There is also a new petition against these proposals.

As always, for the latest information check out the parents' campaign website.
Posted by Rob White at 19:42 No comments: 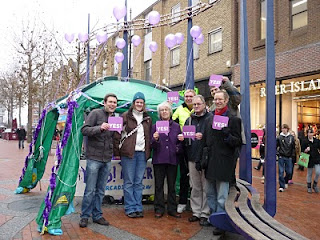 I spent an hour or so at lunchtime campaigning for a yes vote at the Alternative Vote referendum in May 2011. About one in five people accepted a flier, but in my brief time on Broad Street there wasn't much of an appetite amongst the general public to talk about the issues -- it was snowing though!

As I have said before I think moving to the Alternative Vote would be a step in the right direction towards a truly proportional system, but there is still a long way to go with the referendum as the first hurdle to cross.

There is more about the progressive grouping campaigning for electoral reform on the Yes to Fairer Votes website.
Posted by Rob White at 16:42 No comments: