The new parking scheme in Redlands Ward will clearly create knock on problems for Park Ward. We have been lobbying for the Park Ward parking scheme scheme (bordered by Eastern Avenue, Whiteknights Road, Church Road, Wykeham road) and the Crescent Road road safety scheme to be developed and consulted upon as soon as possible.

When we recently raised this with transport planners they said that they were now in a position to start moving forward with the parking and the Crescent Road road safety schemes. We have asked for a meeting in February and will keep residents updated.

An initial idea for the Crescent Road scheme is here. This went to the Traffic Committee recently: http://www.reading.gov.uk/media/6591/Item08/pdf/Item08.pdf

Let us know what you think as well as your thoughts on parking.

If you are interested in regular updates on both of these schemes we have set up a Google group – link below. If you have a Google email address you can subscribe yourself. If not send me an email to rob@readinggreenparty.org.uk and I will add you. 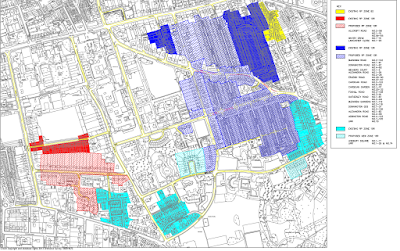 Above is a map showing the new residents’ parking zones in Redlands Ward. Alexandra Rd and to the east are in permit zone 13R. Avebury Square, and Upper Redlands Road(no.1-29) is in permit zone 15R. Allcroft Road, Whitby Drive and Lancaster Close are in resident permit zone 10R. Your permits only allow you to park in the zone in which you live.

The new parking scheme will be carried out in separate phases due to the size of the scheme.  The first phase to be introduced will include properties within Whitby Drive, Lancaster Close, Avebury Square and areas east of Alexandra Road (with the exception of Upper Redlands Road), this is due to be implemented by 23rd Jan. If you live in one of these areas you should have received a letter from the council about applying for permits.

The rest of the approved scheme will be the second phase and is proposed to be delivered at the end of March, this is subject to the delivery of pay and display machines. The council hasn't written to people in this area yet about applying for permits.

If you want to get further updates on the rollout of the parking scheme send me an email: rob@readinggreenparty.org.uk

If you live in one of the phase 1 areas and you haven’t applied for a permit for your car or visitors’ permits already you will need to do so quickly. More information on applying for permits below. As well as ordinary residents’ permits there are special permits for other groups such as carers. There are also discretionary permits for people who don’t qualify for other types of permit and some transitional measures. Contact the council for more information on these and if you don’t get anywhere let us know.

http://www.reading.gov.uk/parkingpermits
Posted by Rob White at 16:13 No comments: 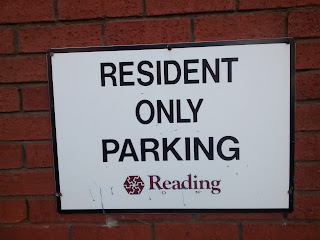 At the Policy Committee on Monday, January 16 councillors will be voting on changes to the parking scheme in Reading including a charge for the first permit. I want to know what people think and so have set out the key arguments in support of a charge below and have created a short online survey for people to let me know what they think.

Apologies for the short notice, but the recommendation from the Traffic Committee was only made yesterday!

Key facts
The council is proposing introducing a charge of £30 for the first permit per year (an increase from 0) and leaving the 2nd permit at £120.

The parking permit scheme (permit administration and enforcement) currently runs at a loss meaning all council taxpayers, including those without cars, are subsidising it. Given government cuts, and the dire financial situation of the council, this is not sustainable into the future.

Introducing a charge for the first permit would mean in some years there is a surplus and any loss will be smaller. This uncertainty is because the cost of the enforcement contract depends on the number of tickets issued.

Any surplus from the scheme will be ring fenced for transport and used as follows:

The short survey can be found here: https://goo.gl/forms/eJdQdSJPeOcXBhJH2

So if we look at the best case after introducing a £30 charge for the first permit and discretionary permits the income/costs would be as follows:

It should be noted that if the number of parking tickets issued is low then there will be no surplus and the scheme will make a loss.

The full council committee report can be found here: http://www.reading.gov.uk/media/6593/item06/pdf/item06.pdf
Posted by Rob White at 15:23 No comments: