The Green party wants to see a better recycling scheme locally which allows you to put more things in your red recycling bin.

Following lobbying from us and others the council has recently increased the range of plastics which you can recycle. More information here: http://www.reading.gov.uk/rubbish

However, the recycling rate in Reading is a very low at 31% – compared to the national rate of 45%. Reading has a recycling target of 50% of household waste by 2020. However recent changes to the scheme are only expected to increase our recycling rate by 1 or 2%. More action is needed and we will keep up the pressure to: eliminate waste at source, get more reuse happening and increase the recycling rate through things like a food waste collection.

The Council needs to be bolder if it is to hit its recycling target.

Yes, it stands for ‘Mass Rapid Transit’ which in most countries means an overhead or underground railway, but in Reading the plan is for a large road that will start at a new carpark beside the Waterside Centre, then bypass East Reading and run along the Thames riverside, over the Kennetmouth, and end up at Tesco on Napier Road. It will be for buses only, but with space for bikes and walking.

Why are the Council trying to do that?

The Council claims that without it, Reading can’t ‘grow’. They mean that the road will increase the capacity of people to get into Reading town centre from areas outside Reading, like Wokingham.

Yes, there’s the current level of traffic, through Cemetery Junction and other routes into Reading, which will be unaffected by the scheme, and there’s the existing public transport of trains and buses.

What can you do about the scheme?

Whatever your views on the scheme are, you can let the Planning Officer know here: www.bit.ly/eastrdgmrt

If you are opposed to the scheme going ahead you can sign the petition here: www.bit.ly/soarpetition

And if you live in Reading, you can let your local Councillor know personally – email them!

So, will this scheme help people in East Reading at all?

No. The traffic modelling from the Council shows that the new road will have no effect on congestion, or improve air quality. It will remove the unspoilt riverside from the Thames, and Kennetmouth, that so many people use as green space to walk, run, cycle, picnic and just relax in.

So why is the Council pressing ahead?

The Council says that there will be significant housing developments built in the coming years around Reading and Wokingham, and those thousands of new people will want to get into Reading.

Evidence suggests not. More and more people are working from home, significantly reducing the traffic on the roads. (The greatest recent increase in traffic is from home delivery vans! These won’t be affected by a bus-only bypass. Nor will the ever present and increasing traffic from school-runs.) Traffic on the London Road has been gradually reducing over the years, rather than increasing, so its likely that more buses could plan to use that route, rather than a new road. And there is no saying that people in new housing developments near Wokingham wont just work in Wokingham, or Bracknell, or any other near-by area with high employment in industries like TelComs and IT. The planned advancement of automated, driverless cars in the next few years makes old-fashioned ideas like building more roads to new carparks seem horribly out-dated.

What will it cost?

The current estimate (likely to increase with inflation and the complexity of a road-building scheme in a flood area beside a major waterway) is £24 million. With the associated Park & Ride at Broken Brow (beside the Wokingham Waterside Centre) planned by Wokingham, the cost is £31.5 million.

What’s the cost to the environment?

Just as enormous. Habitat will be lost, green open space will be lost, protected woodland will be destroyed, along with over 100 trees. The Thames riverside, and Kennetmouth, will be devastated.

What does the Environment Agency think about the scheme?

The EA doesn’t comment on the scheme as such, but does comment on the Planning Application. Their first response contained a large list of objections. Some of these may have been mitigated by changes to the Council plans, but the second EA response, containing a full list of updated objections, hasn’t been published by the Council. Other agencies opposing the Planning Application are the Wildlife Trust, the Napier Road flats, Newtown GLOBE, and many others, even including the Council’s own ecologist and Leisure Department.

What do local residents think about the scheme?

Hundreds of local residents have objected to the Planning Application. Thousands have signed petitions against the scheme because of the huge cost to the environment, to the tax-payer, and all for just a few extra buses an hour in the week. The new P&R won’t even be open on the weekends.

Why aren’t the Council doing something else instead?

Who knows! There are plenty of other options, but some have been ruled out and some don’t seem to have been properly considered. Local residents want to know why the Winnersh P&R isn’t being expanded, or a congestion charge brought in, or a proper bus lane considered on the London Road. The lack of any real comparison of alternatives is one objection that has been raised to the scheme.

Progress on letting the building that was the Chalkboard café…

Things have started to move with the council letting the building that was the Chalkboard Café. Green councillor Brenda McGonigle asked a question on this earlier in the week (question and response below).

If you are interested in getting something going at the building in Palmer Park that was the Chalkboard Café then the documentation can be found below.

As a parent and regular user of the park over the winter I have been sorely missing being able to grab a hot chocolate, warmup and use the toilet. Having no Café has left a hole in the community. I hope it can be opened up as soon as possible!

Can we have an update on the building that was the Chalkboard Café in Palmer Park. Are there any plans for its use in the near future?

REPLY by the Lead Councillor for Culture, Sport and Consumer Services (Councillor Hacker):

Thank you for your question Cllr. McGonigle.

As you may be aware the previous occupier who was running the Chalkboard Café withdrew from the lease agreement because the business was not financially viable.  The Council is therefore looking for a new occupier and will be launching a new community letting process by the end of the current financial year.  This will include all relevant application documents and information relating to rental fees for the site with a view to having a new operator in place ready for the busier trading period from May onwards.  The opportunity will be advertised publicly through both the Council’s and Reading Voluntary Action’s (RVA’s) websites and networks.

School cooks in Reading to get a real Living Wage

I followed up on on school cooks getting a real Living Wage at a recent council meeting. In summary they will do shortly! Question and answer below.

If you want to help us campaign on this and other issues then please get involved: https://reading.greenparty.org.uk/get-involved/

As councillors know, this Council is a publically recognised supporter of the Living Wage Foundation Living Wage, as the plaque in the council offices foyer proudly declares.

The report, to which Councillor White refers, was wrongly included on the agenda of the last ACE Committee meeting and was a first draft prepared by council officers. As it did not have my support nor that of the Labour Group, it was withdrawn from the agenda.

I am pleased to advise that the contract extension has now been negotiated with the current provider of school meals and this includes the payment of the real living wage in full to all staff from the beginning of that extension later this summer - we made it clear to Council officers and the contractor that we would accept nothing less.

A bit closer to better crossing up near the Three Tuns… 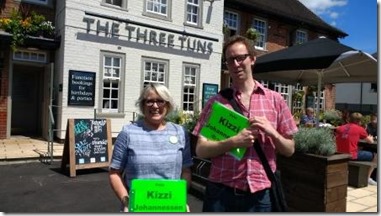 We have been keeping up the pressure to make sure Wokingham Council looks into the feasibility of a new pedestrian crossing near the Three Tuns. At the moment there is no direct formal crossing over from the estate agent to the Co-op at the junction of Wokingham Road and Church Road. Update from Wokingham Council below:

"Wokingham Borough Council have commissioned their consultants, WSP, to undertake the assessment and I can also confirm that traffic, pedestrian & cycle surveys and initial data collection has been completed.  The consultants are now preparing a traffic model of the junction prior to testing the provision of a formal crossing facility.  Following that, there will be design considerations before a final report is provided for the council to consider which is currently expected in April 2018." 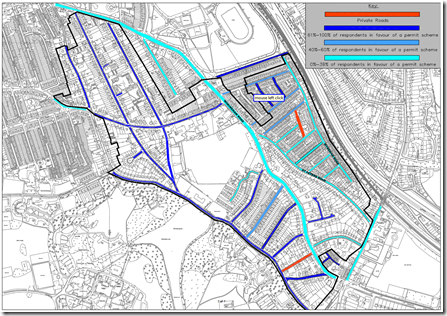 Above: map showing consultation results. Click on it for a bigger version.

Thanks to everyone who responded to the East Reading permit parking consultation. The council have done the initial analysis of the results.

Recently councillors and transport planners met to look at the initial analysis. From the consultation responses, across the area there is a majority in favour of introducing permit parking.

If given the go-ahead at the March committee Transport Planners will then design a scheme for the whole area.

This scheme will be informally consulted on over the summer and the final formal consultation will be done towards the end of the year. A scheme could then be implemented in 2019.

We will continue to keep people updated by email, paper letter and by holding more street meetings and public meetings as we did over the consultation period. We believe it is important that residents are kept informed so you can respond thoughtfully to consultations and get the best result for your road.

We do not have emails for everyone in the area so please forward this on to anyone who you think might be interested. If you receive a forwarded email let us know if you would like to be added to the list for future updates.

Your Green councillors care about the area and will continue to work to with you to improve it.