Glamorous camping in the Lake District 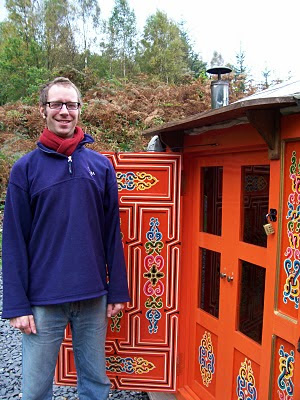 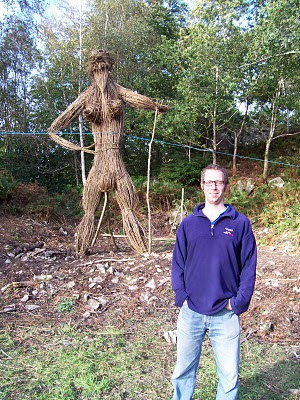 Back from holiday now. Sam and I went glamorous camping up in the Lake District at the south of Lake Windermere. The weather was mixed, but as we were staying in a yurt with all the mod cons – stove, fridge, futon, basic cooking facilities etc – it had far less impact on us than if we had been in our little tent. We did a bit of walking, sightseeing and generally relaxing. One of the photos above is of our yurt's brightly coloured front door. The other is of the wicker man/woman we stumbled across when wondering around our campsite. After we got over our initial mild shock the nice people constructing it explained that we were safe and it was for the Festival at the weekend. No virgins were sacrificed in the making of this blog post.
Posted by Rob White at 11:55 No comments:

With the Lib Dems in freefall both locally and nationally disillusioned LibDem voters may want to consider voting for a party which puts fairness, integrity and the environment centre stage. Green MP Caroline Lucas spoke at our recent conference on the subject.
Posted by Rob White at 18:18 2 comments:

Here is the latest update from officers on Maiden Erlegh:

"It has been bought to my attention that some parents who feel they have “lost out” as a result of the recent decision by the Secretary of State to direct the Maiden Erlegh Academy have launched a campaign and have won the support of their MP (John Redwood). It is reported online at http://www.getwokingham.co.uk/news/education/s/2100326_hands_off_maiden_erlegh_school_catchment. The report correctly notes that the only recourse now open to those who object is judicial review – an expensive and time consuming process which will not be entered lightly by either the school or Wokingham council. There is a time limit of three months (I believe) to make such objections which means there is a deadline around the start of December.

Wokingham’s plan of record is to invest in Bulmershe and when they make that decision I think it will close the current chapter on ME catchment areas. We have no reason to believe that the school will pursue judicial review at this stage.

I say the “current chapter” as the school can consult on changing admission arrangements each year. There is a risk to parents from this, so in addition to Wokingham investing in Bulmershe, it is worth noting that RBC continues to seek a solution to the space pressures. The first is continuing to actively support the bid for a Free School in East Reading, led by Reading College. The second is to submit a expression of interest to the recently announced national school building programme (see Cabinet 26th September) to seek funding for a secondary school in East Reading in case the Free School bid is not successful. The provision of additional capacity in the area will provide real choice and reduce the level of anxiety parents feel.

Officers are not planning to engage further in the discussion about current admission arrangements but will monitor any actions taken by Maiden Erlegh for future admissions consultation rounds."

It was a busy Traffic Management Advisory Panel earlier in the week with a Talfourd one-way plug, pedestrian crossings and the Easton Area Access Study on the agenda.

Residents had came along to support measures to end the Mexican stand-offs in Talfourd Avenue. I backed them up and both the one-way plug scheme and the 20 mph speed limit scheme for the wider area got the green light.

The removal of crossings -- Jackson's corner, outside the station and near to the hospital -- was discussed. There have been some minor improvements to the first two crossings, but they have been wrapped up in a six-month review which reports in November. I spoke of the urgency to reinstate the crossings and plans to improve the situation near to the hospital have been brought forward. However, with the legal consultations etc it is still going to take a while.

The other item of interest on the agenda was the Easton Area Access Study to look into improving Cemetery Junction and the surrounding corridors for pedestrians, cyclists and public transport. We have been lobbying for this study for a number of years so I was pleased to finally see it getting going.

As usual things never move as quickly as I would like, but all in all a positive meeting.
Posted by Rob White at 18:39 2 comments:

So far the constituencies in Berkshire remain safe although across the country people will be losing representation as the number of MPs is cut. From the report:

“We propose to keep unaltered all six constituencies that are within the 5% electoral quota (Bracknell, Maidenhead, Newbury, Reading East, Reading West and Wokingham.”
Posted by Rob White at 16:35 No comments:

More on Maiden Erlegh including the estimated cut-off

Recently I blogged about the Office of the Schools Adjudicator's announcement that Wokingham's new catchment area tie-breaker for Maiden Erlegh was ‘unfair’. And that the adjudicator had instructed the school to go back to using radial distance. I thought that this was an improvement on Wokingham's proposal -- and I still think this.

However having now considered the verdict in more detail I don't think it is as good news as it might have been. This is because the adjudicator chose to stick with the enlarged catchment. This means some Park Ward residents will still be worse off.

See this website for a map showing the estimated cut-off.

There is more analysis of the report here.

We are talking to officers about what can be done to correct this injustice. Unfortunately though I believe we are stuck with the current system for this year. However Maiden Erlegh could change the rules in the future if it wanted to, but any change is going to mean someone loses out. What we really need is a new secondary school in the area. But things have gone quiet on this...
Posted by Rob White at 17:18 No comments:

The competition for a vision for Cemetery Junction is still going but the deadline is approaching -- Monday, September 19.

If you haven't got in contact with your ideas/vision the group has produced an entry form which has two different views of the junction for you to write and draw on.

If you needed any more of an incentive other than improving the area we even have some prizes from local businesses!
Posted by Rob White at 20:19 No comments:

I got this on a bike security:

The day will consist of:

so please come down & help tackle cycle crime in your area

Thanks
British Transport Police"
Posted by Rob White at 18:49 2 comments: