The local paper has writen up an article below entitled "Reading councillors gag Green member at meeting about openness". Donate to show your opposition to Labour's action.

Donate now, even £1 would be appreciated, to send a message to Labour (because we will tell them how much people donating because of their actions raised) to behave democratically and not gag the Greens. So far we have raised £20. You can donate instantly using PayPal  by following the link below:

After donating please spread the word.

Is democracy dead in Reading? #rdguk 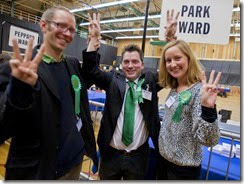 I used to think that whilst Labour councillors would not always agree with what I said at least they would allow me to speak. No more.

Tonight at the Strategic Transport, Environment and Planning (SEPT) committee I went along as Councillor Whitham, the only Green councillor on the committee had been called away to work in Belgium at short notice.

It has been my experience previously, and the council constitution allows, any councillor to give notice that they would like to speak at a meeting and it is then at the discretion of the chair. I don't ever remember the chair ever saying no to a councillor before. So tonight I asked to speak on four items.

However on the first real item on the agenda, Bet Tickner the Labour councillor chairing this committee broke with this convention and would not allow me to represent my constituents and speak. She did not give a reason in the meeting, but before the meeting had talked about a "full agenda".

I spoke out against this injustice, but failed to get anywhere.

Surprisingly on the next agenda item despite one of the members of the public speaking and using up their allocated time Bet was happy, despite the "full agenda" to find time for another member of the public, from the same organisation, to speak.

Finally, to add insult to injury when I tried to get back into the Civic Centre to check my councillor emails at 9 PM, fully expecting the meeting which started at 6:30 PM to still be going because of its "full agenda", it was locked up as the meeting had finished early.

Full agenda or Labour being antidemocratic?

Do you believe in a functioning democracy locally? If so why not get involved with the Green Party to make this a reality: http://reading.greenparty.org.uk/get-involved/

UPDATE: for clarity no plans to stop religious services, it will just have more performances.

In the papers a little while ago there was a piece on plans to turn St Bartholomew's Church on London Road into a performance venue. Most people I spoke to thought this was positive, but some people in the immediate local area were interested on the impact that this might have on issues like parking. I asked for a briefing from planning and got the following:

"You had queried the proposal to convert St Bartholomew’s Church on London Road to a performance venue. In response to your questions:

- The church have not submitted any request for pre-applications discussions regarding planning to the Council’s Planning Section.

- The use of the church for occasional events/performances would not require planning permission. A church is a D1 (non-residential institution) use under the Use Classes Order 1995 (as amended). A church hall is also a D1 use, so the normal activities that would take place within a church hall would not require permission if they were to take place within the church. To fully convert the church from a D1 use to a music/concert hall (a D2 assembly and leisure use) would require planning permission.

- There isn’t an adopted planning policy regarding changes of use from D1 to D2. Were an application required, it is likely that impact upon the amenity of neighbouring residential properties and parking would be the main considerations."

Following concerns raised with me about the state of the Palmer Park velodrome I got the following update on improvement works from the council:

"Thank you for contacting me in regards to the cycle clubs concerns about the cycle track.

We have regular conversations with the club and they have periodically expressed concerns about the track surface. Early this summer we arranged for a contractor to quote for repair work and their view was this was not necessary. We do periodically get the areas of the track repaired as with any surface this deteriorates. We have arranged for the contractors to revisit.

We have also been in discussion with them about the track surround. We are expecting repairs to be undertaken to the track surround in the next few weeks. This includes replacement of most damaged boards, re-securing any loose ones and repairing the aluminium tops.

A programme of works are also being arranged to better control the vegetation around the track. This will ensure the track is appropriately maintained, it is however inevitable there will be some deterioration just from weather, time and the nature of the banking.

Please do not hesitate to contact me if you require any further information."

Back to top of article
Posted by Rob White at 15:38 No comments:

Over the past few days there has been two burglaries in the East Reading Neighbourhood :

Please remind your NHW members about not leaving windows or doors insecure and report any suspicious incidents, sightings or any information to The Thames Valley Police Enquiry Centre on 101

If you would like to receive these ‘alerts’ about where you live,  please register at www.thamesvalleyalert.co.uk

A few people have asked what is happening with the planning enforcement case regarding the inappropriate replacement of windows at the Granby. See below for an update:

"I wrote to the developer in April requiring them to remove the unauthorised aluminium windows or face further enforcement action. I received no formal response to this letter but the developer did engage a local planning agent who entered into negotiations with planners over a solution to the issue. Those negotiations now seem to have broken down and no further action has been taken but an application for an alternative scheme is still expected.

The unauthorised development has not caused any irreparable harm to the facade of the building in that all the window openings remain as original and the windows can be easily replaced with something more suitable once the necessary permissions have been granted. This still gives us some leeway to achieve a negotiated settlement but, if no progress can be made, it is likely that formal enforcement action may be necessary."

Some progress on a few other bits of casework at Arthur Hill swimming pool in East Reading. I received it a while ago so it is slightly out of date. We are also trying to secure meeting to talk about investment in this important swimming pool:

"Thank you for your recent enquiries regarding issues at Arthur Hills Swimming Pool. I have answered each enquiry individually below:

There are boards over a number of the windows – toilets were closed but the boards were never taken off - is this intentional? – The boards were erected for security reasons while the pool was closed. There were further security concerns once the work had been carried out, and it was felt that the boards would offer protection. I have now placed an order with our maintenance team to remove all boarding, and ensure that the windows are repaired.

The shower has been out of action for about three weeks – Our maintenance team have been out to asses the works required in order to carry out a complete repair. In the meantime, we are going to lay some non slip matting so that we can allow customers to re use the shower.

The car park at the back is overgrown. – Site staff have placed an order for a team to come out and cut this all back.

There are new bike racks, but due to the tightness for the car park people are parking so close to the bike racks that they are impossible to use, can we look into putting down some white lines to guide drivers? – Yes, I am currently working with our transport planner to place a protection box around the racks in order to stop this happening. While doing this we will also ensure that there is still enough space for 6 unmarked car parking spaces." 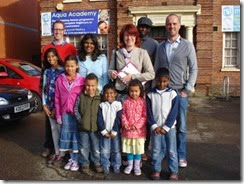 Working with residents we have got swimming lessons back at Arthur Hill. More details below:

"Lessons will be returning to Arthur Hills in the New Year programme (starting in January 2015) on Wednesdays from 4.00pm – 6.30pm. Previous sessions delivered at Arthur Hills demonstrated that stages 1 - 3 were the most popular / required. Stages 1 – 3 will be catered for initially in these new sessions and we will be monitoring feedback to establish public demand for further stages / sessions to be added.

We will be finalising the timetable and marketing these classes in the upcoming weeks. Ongoing recruitment and training of swim teachers will be continued."