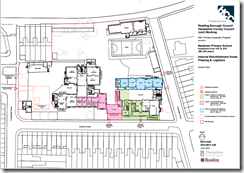 There are 3 phases to the proposed refurbishment. Phase I includes the completion of the new entrance, foyer and administration area with landscaping to the front façade of the East building. The upper ground floor spaces will be refurbished at the same time. Existing school access arrangements will continue during this phase.

Phase II As the administration staff will have moved over to the East building, the second phase of work will be the current administration areas and staff room. Work to the canopy will also take place at this time. School access will be diverted to the site entrances on Cumberland Road and Cholmeley Road: there are several points of access along both roads

Finally Phase III will be the refurbishment of the space used by Riverside Day Nursery. During this phase, the school will not be in operation for the majority of the phase as it will be during the school summer holidays. When the phase and the end of school term overlap, the school access strategy will make use of the new entrance in the east building and the refurbished canopy space

The accommodation will comply with the requirements of the DDA and Approved Document M of the Building Regulations and Building Bulletin 99. There will be no loss of the existing building’s facilities due to the proposed development. It will create a new classroom and group room on the ground floor and a new Deputy Head’s office and staffroom on the first floor.

Riverside Day Nursery currently rent a large area of the East building from New Town and a separate project is running in parallel to move them to new accommodation. This will be subject to an individual planning application and as such will have its own planning exhibition.

As the school has listed building status early conversations are being had to address any possible conflicts with that.

As with the majority of schools in the expansion programme one of our main issues will be dealing with the increased transport issues that residents are expecting following an expansion."

Gas holders to be dismantled in Reading East area 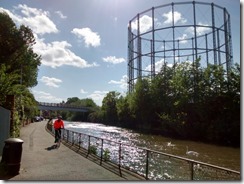 I have received more information on dismantling gas holders from the council. It is the ones in Wokingham which are being dismantled now. The one in Reading opposite Newtown school on the other side of the Kennet is not being dismantled in the short term but the owner has contacted the council about this.

Thank you for your enquiry, received on 19th May 2015, concerning the dismantling of two Gas Holders. Having contacted SGN, who sent the letter to your constituent, I can clarify that the letter relates to the dismantling of two gas holders to the west of Suttons Park Avenue [...]. This land is actually outside of the boundary of Reading Borough Council, and is instead within Wokingham Borough Council. SGN has confirmed that they have been liaising with David Wetherill from Wokingham Borough Council’s Planning Department (0118 974 6389 or david.wetherill@wokingham.gov.uk and copied into this email), so I would advise your constituent to contact David for all matters concerning this particular site. SGN confirmed that they notified Wokingham of their intention to demolish these gas holders last year, with further details being available to view via Wokingham’s website (use the reference number DEM/2014/0790 to view documents submitted and the decision notice by Wokingham).

The entirely separate gas holder [...] is within Reading Borough Council (accessed via Kennet Walk). I can confirm that there are no current planning applications at this site, but in the past week a pre-application enquiry has been submitted concerning the dismantling of this holder. This is presently being considered by officers with view to providing advice to SGN. More generally, the site is allocated within the East Side Major Opportunity Area of the Reading Central Area Action Plan (2009). The specific policy reference is RC3f, with the principle allocation being as follows: “This area will be used for residential development. Development should enhance the character of the mouth of the Kennet and should maximise the potential of the site to be a river gateway to Reading”. As such, the future use of the site is earmarked for residential development. Under policy CS16 (Affordable Housing) of the Core Strategy (2008, altered 2015) 30% of the total number of dwellings would be sought to be affordable, unless viability circumstances justify a lower affordable housing contribution.

I hope that this information is of assistance to you. Should you have any questions or queries concerning the above, please do not hesitate to contact me.