Pothole of the week 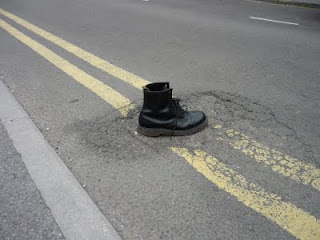 I have been noticing this pothole on Norwood Road for a while now. It has grown to such a size that I have now reported it. I tried to give it some scale in the photo by putting my boot in there -- it is a few inches deep and about a foot across. If you know of any others in the area let the Council know, report them on Fix My Street or get in touch.
Posted by Rob White at 14:40 No comments:

I heard a piece on radio four about the 100 things challenge. A quick Google found their website. Basically this guy now only has 100 possessions. I do not think I will take it to that extreme, but it has motivated me to pass on some of the things that I have been hoarding -- in combination with the thought that at some point I will probably move house and when that happens I do not fancy moving too much junk.
Posted by Rob White at 16:58 No comments:

Just a quick note to plug that The Kennet Morris Men will provide music and dance at the Jolly Anglers on Monday 24th August, 7.30 – 8.30. John -- the old landlord -- will be visiting. Come down and show your support.
Posted by Rob White at 18:42 No comments:

Thanks to Total Politics who have ranked me at number 14 in their top 25 Green blogs.
Posted by Rob White at 12:20 No comments:

A while ago the Council changed the layout of their website so the "Contact the Council/Customer services" link -- via which you can e-mail the Council -- was no longer underlined and appeared as just a heading -- although if you knew it was a link you could still click on it. I asked the Council to fix this which they did, but recently they have rolled back the fix making it harder for people to contact the Council by e-mail. When I challenged the council about this they said the way they fixed it made other sections of the website look untidy. All it would take is a simple link put in below the title saying 'Click here to e-mail the Council' and another one saying ' Click here for more contact information'. Come on Reading Borough Council pull your finger out.
Posted by Rob White at 11:49 No comments: 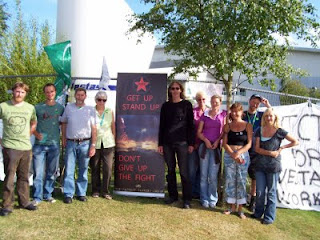 While on holiday recently on the Isle of Wight my partner Sam and I headed down to the Vestas wind turbine factory which has recently been closed by its owners.

The closure received lots of coverage because some of the 600 workers who were being made redundant took to the roof in protest at the loss of jobs in an area of already high unemployment and the loss of the UK's only wind turbine factory at a time when the government says it wants to expand the renewables sector.

Just before leaving for holiday the roof occupation had ended, so I was not quite sure how the campaign was going. We got to the site via a scenic walk from the centre of Newport down the river Medina -- which was used to transport turbines to the port. Upon arrival I was pleasantly surprised by the level of activity. There was also a well provisioned protest camp set up outside the gates, loads of banners showing support from organisations ranging from the Fire Brigade Union to the local church. I was pleased to hear that the fighting fund was up to £10,000 and I chipped in my loose change, getting a copy of their protest song "Boys on the balcony" and a ribbon in exchange.

I found it really interesting to see the coming together of the different groups. The workers were leading the campaign. There was the RMT supporting them through the redundancies and fighting the sackings. People from the Climate Camp were there helping out generally and with the catering. The wider local community was also supportive. While I was there a number of people dropped in with supplies including fresh vegetables for the kitchen and cake.

If we are to tackle climate change we are clearly going to need this kind of broad coalition. We will also need the equipment to generate electricity in a renewable way. What better way to get people into work than to nurture and expand the renewable energy sector. This is part of what the Green Party have been calling for in the form of a Green New Deal, an innovative plan to restructure the economy through a billion-pound package for investing in green jobs -- in renewables and energy efficiency -- to dramatically reduce carbon emissions and cut householders’ fuel bills.

The proposed Isle of Wight closure is a blow for the 600 skilled British workers set to lose their jobs. It also threatens any attempt the UK makes to position itself at the forefront of global technological efforts to create a greener and fairer future.
Posted by Rob White at 10:10 No comments:

Holiday on the Isle of Wight

We arrived on Saturday at the campsite on the Isle of Wight. Not having the instructions to the tent we borrowed, it took us a while to erect it and when we had finished we had six polls left over -- I am sure they were not important.

Over the course of the week we did plenty of walking around the island. We ate well from our barbecue and gas stove. Our sightseeing included a windmill, possibly the oldest vineyard in the UK and a glassworks.

At night being in a tent there was not much to do apart from read and sleep -- no rude comments please! We did eat out one evening at the Hong Kong Express in Newport and their vegetarian set meal was very tasty and filling. On another evening we went to the cinema in Ryde to see the new Harry Potter film. I had been avoiding the films and books up until that point, but I thought I should see or read one. As the cinema price was £2.50 and seeing a film is quicker than reading a book I could not say no. I was pleasantly surprised and enjoyed the film.

On the Friday before we went home we had a free day and Sam discovered in the local paper that there was still campaigning going on at the Vestas wind turbine factory over its closure -- we had not realised until this point due to our limited contact with computers and mobile phones etc. So we decided to head down there -- more about this when I get the chance to do another post but suffice to say the campaign still goes on.

On Saturday before catching the ferry home we popped into the Garlic Festival. As you might imagine there was plenty of garlic merchandise -- preserves, beer, seed etc. There was also a strong man, bands and various other entertainment.

All in all a good holiday and I would definitely recommend the Isle of Wight as a holiday destination.
Posted by Rob White at 13:31 3 comments:

A month in the life of a Green Party campaigner -- July

Community meetings and events
But I made it to lots of community meetings. The first weekend in July was particularly busy with the Kennet Walk barbecue on Friday, the Orts Road estate 30th anniversary on Saturday and East Reading Festival on Sunday.

Residents' enquiries and requests for repairs
I was busy talking to people about the plans to change Palmer Park and so only picked up a few items of casework.

Campaigning
The campaign to Reopen the Jolly Anglers been my main campaign recently.

Green party
I have coordinated the delivery of the latest Park Ward newsletter.
Posted by Rob White at 15:09 No comments:

Latest news from the campaign to Reopen the Jolly Anglers

Well done to everyone for your hard work. The campaign continues to go from strength to strength. The Facebook group now has 213 members!

Later today MP Greg Mulholland -- from the all party Save the Pub group -- is coming to Reading. He will be at the Jolly Anglers from 11:40 a.m.

The next event is Morris dancing at the pub on August 24 -- details to be confirmed, but put the date in your diary.

The petition still rumbles on:

Not bad for a group of volunteers! Most of this has been organised through our regular committee meetings. If you would like to get involved then please contact Cathy and she will keep you informed of when the committee meetings are -- cathymars@yahoo.co.uk.