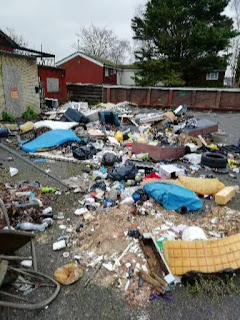 A few weeks ago Louise Keane (Katesgrove Green Party campaigner) let me know that the Woodley Arms site still hadn't been cleared (when we raised it last we were told it would be by the owner, but COVID-19 has slowed things down) so I raised it with planning enforcement again - response below. I've had reports from residents that workers have been on site. Let Louise Keane and I know how things go rob@readinggreenparty.org.uk. We'll keep up the pressure!

RBC response: "As you may be aware, the above site has been the subject of various planning applications and is expected to be redeveloped soon.

Having previously contacted the developer and his ground works contractor it was hoped that the site would have been cleared by now.  However, the clearance date coincided with same time the country went into lockdown due to the Coronavirus. The effect of which caused, amongst other disruptions and difficulties, many development projects to go on hold. However, having contacted the developer again yesterday I have been assured that work to erect a secure wooden hoarding around the site will begin this week, therefore preventing any further rubbish from being dumped on site, after which work will then begin to tidy the land and start the redevelopment."
Posted by Rob White at 20:16 No comments: