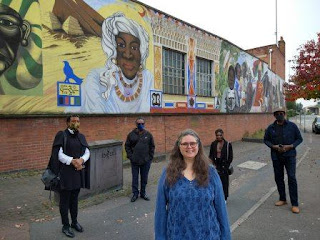 More protection needed for Reading's Black History Mural
At a recent council meeting, I was able to ask a public question about the fate of the Black History Mural at the bottom of London Street. This iconic image on the side of the Central Club is so important to the Black Diaspora, to Katesgrove and to Reading, and I fully support the initiative from the community to apply to Historic England to have it nationally listed. I also think the flawed bidding process for Central Club should be reopened - petition here www.bit.ly/savecentralclub and more below.

But we don’t know how long that process will take, and the building is unused and unloved by the Council. So, in the meantime, I asked the Council to Locally List the mural as a stopgap. Sadly, Labour Councillors say that this won’t happen as it isn’t needed – that because it falls inside a ‘Conservation Area’ it has protection anyway.

But the Conservation Area doesn't even mention the Mural, or list it as having any merit whatsoever, and goes so far as to say that modern development at the end of London Street actually spoils the appearance of the area. That doesn’t feel very protected at all.

The Council could have locally listed the mural, and perhaps it should look at Historic England’s advice that "Heritage assets can be added to a local heritage list regardless of whether they are in conservation areas." They even say that one thing you should look at is “unlisted buildings that make a ‘positive contribution’ to the character of a conservation area." The Conservation Area needs urgently updating to show what a positive contribution the Mural makes!

Sign Petition for Central Club bidding process to be reopened
The fate of Central Club building on the side of which the mural is located is now more uncertain than ever. Labour have unfortunately agreed to sell it to a developer primarily to build flats for profit. Now the developer has come back with a reduced offer, which the Council has accepted without even talking to the community bidder - Aspire. That isn’t right.

Green councillors supported the Aspire African Caribbean proposal for the Central Club which was knocked back by the council. If you agree that community should be before profit, you can sign our petition for the Central Club bidding process to be reopened www.bit.ly/savecentralclub.